After a busy week traveling out to nationals in Snowshoe, West Virginia, I’ve found the time to collect my thoughts and write about the crusher. I went in to the race with a solid nutritional plan and a tentative race strategy. My game plan going in was to make sure I stayed with the lead group up the first long climb, while also maintaining a pace that would keep the whole group honest. From there I wanted to be in a big group going around circleville as the pace there is 25-28 m/h so being in a group can save tons of energy. I was very confident I would have the strength to stay with the lead pack until the col du crush, from the col du crush forward I wasn’t sure how it would play out. I’ve heard of guys much stronger than myself getting absolutely popped on the col du crush so from that point forward I was just going to race on instinct.

The nutritional plan and race plan went perfect, the pace was such that I felt like I could eat comfortably, but we also wittled the lead group down to somewhere around 15 guys over the top of the first 25 mile, 5000ft climb. I started with my margarita bloks as I wanted the sodium on board early, and wanted to save the easier to digest Gu’s for later in the race. In long mountain bike races, sometimes the trail dictates when you can eat and when you can’t so I will have to pop 4-6 blocks at a time which can be tough on the stomach. On smooth gravel roads you can eat whenever you want, so I just decided to pop a blok every 15 minutes.

Cortlan Brown went over the top of the first climb with something like a 2 minute lead on our group of 15 guys, We all knew the race had a long time left so we let him go without much of a fight. One thing we didn’t consider was that 3 time winner Rob Squire would be able to roll around circleville without taking a pull because he had a teammate up the road in Cortlan. We dropped what felt like 5 or so guys on the extremely loose descent to end up with a group of 12. 8 of us took turns in an echelon keeping the pace high so that Cortlan’s lead wouldn’t get too dangerously large, meanwhile Rob and Jules sat on the back because Cortlan is their teammate and two others sat on the back because they are sneaky. The pace was solid on the flat fast roads, but nothing crazy which was nice, because I don’t excel on the flats, and I had elected to run a smaller gear than most guys there. We hit the feedzone and by this point I had run out of Maurten 160, and I wasn’t allowed to have someone feed me, so I took a water from one of the hundreds of amazing volunteers at the crusher and mixed myself some more Maurten on the fly, I’m glad I did too because I needed every drop of that hydrogel for later in the race.

The race finally came alive in the sarlacc pit. One of the guys who I didn’t know and who didn’t take a pull on the road segment set a pretty solid pace up the pit and whittled the group down to 6, with Cortlan still up the road. We all felt the effort and it set a precedent for the impending col du crush. I popped my second of 3 roctane gu’s. Once the climb hit the dirt again we could see we were going to catch Cortlan. As the climb got steeper I felt the urge to go faster. At this point I had no race plan. If you go solo on the col du crush, you have to also go solo for close to 15 miles of rolling terrain over the top. I looked at the body language of the guys around me and decided it would be best to go over the top now and try and hold whatever gap I could to the finish. Within 2 or 3 minutes I had bridged to Cortlan and still felt strong. With 10 minutes, I had what felt like over a minute on 2nd place. I went over the top with a 2 minute gap and got the KOM prize.

From there I had another roctane gu, and I had 3 spare bloks in my pocket just in case. I had eaten enough food and drink mix that on paper I should be able to make it to the finish without bonking. From there I just suffered all the way to the line. My legs were on fire the whole time, I wondered if going that early was a mistake, and looked back to see if they were gaining on me. I never saw the rest of the group again and I came across the line for the win at one of the coolest events I have ever taken part of.

Luckily, we had perfect weather. At most we got very light rain for short periods of time and we had an overcast for the entire race. The only thing I would change moving forward if it is extremely hot like it has been in years past would be to take salt tablets. There is no way to get feeds other than from the volunteers, and the pro group does not stop in the feed zones. I felt like I had plenty of fluid on board for the conditions we had, but if it were hotter keeping sodium on board would be super critical. For more information on this amazing event check out tusharcrusher.com 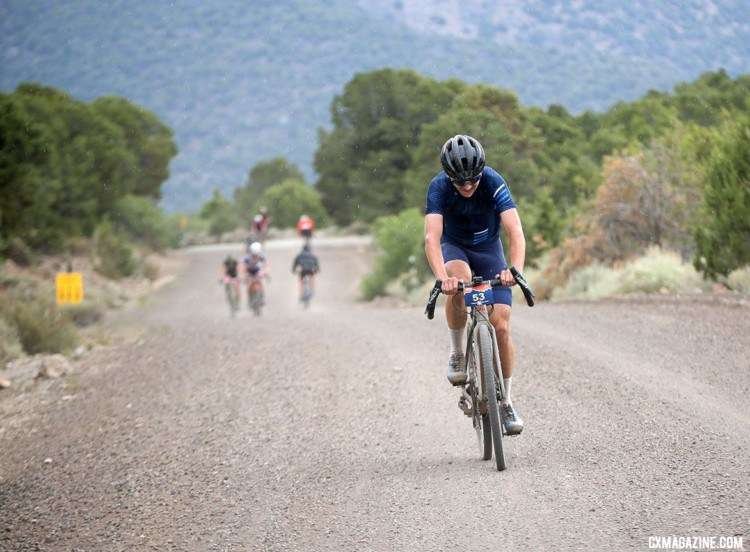 The gap keeps getting bigger between Zach Calton and the others. © Cathy Fegan-Kim